Bowel cancer (Colorectal cancer) is the 2nd most common cancer in Australia and remains a leading cause of cancer death. The vast majority of bowel cancers arise from polyps, small fleshy growths within the bowel that rarely cause symptoms. In general the progression from a benign polyp to cancer takes many years, meaning there is an opportunity to prevent cancer by screening for and removing polyps, and to reduce cancer death by detecting the disease at an early stage.

Current guidelines suggest that everyone over the age of 50 years should participate in some form of bowel cancer screening. This should either be with stool based tests (faecal occult blood test – FOBT) or Colonoscopy.

Faecal Occult blood tests (FOBT) look for microscopic traces of blood in the faeces associated with advanced premalignant polyps or with bowel cancer. When used as screening in asymptomatic patients, FOBT should be performed every 2nd year. A positive result always needs follow up with a Colonoscopy.

If you have had a positive FOBT we will ensure you are seen promptly and have a Colonoscopy booked within 30 days. If you have a referral from your GP you may be eligible to book in for Colonoscopy directly.

Colonoscopy is a more effective form of screening as it allows the detection and removal of polyps before they have reached an advanced stage or become cancerous. Because polyps rarely cause any symptoms there is a rationale for 5-yearly Colonoscopy in anyone who is at increased risk of bowel cancer.

Who should have a colonoscopy? 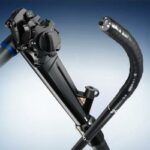 Example of a colonoscope