Endoscopic Mucosal Resection (EMR) is a specialsied form of Polypectomy that allows the Gastroenterologist to remove large flat or sessile polyps during colonoscopy, whereas in the past these polyps would have required surgery. Using this technique, polyps of almost any size can be removed, so long as they have not yet turned cancerous. This can generally be determined through careful inspection of the polyp, or with biopsy.

The technique of EMR involves the injection of a specialised solution* into the bowel wall (submucosa) just below where the polyp is attached. This lifts the polyp up off the bowel wall on a cushion and means the polyp can be safely snared off either in one or many pieces, until it has been completely removed. Colonoscopy with EMR carries a slightly higher risk than normal procedures with around a 0.5% chance of bowel perforation and 5-10% chance of post procedure bleeding

* The solution is made up of a volume expanding type of intravenous fluid (Gelofusine®, Voluvan®), mixed with blue dye to highlight the polyp tissue (methylene blue) and a tiny amount of adrenaline to prevent bleeding.

We perform EMR procedures in all public and private hospitals and in almost all cases the patient is able to go home on the same day like a normal colonoscopy. We will ask you to stay on a clear liquid diet overnight following the procedure and to contact us if there are any problems.

Removal of large flat polyps by EMR in the public or private hospital
Rectal, Colonic and Gastric EMR 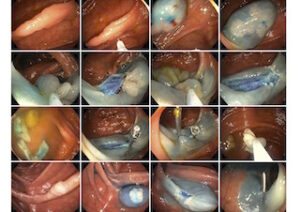 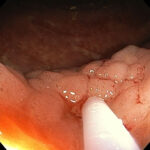 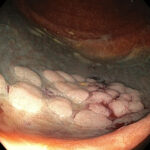 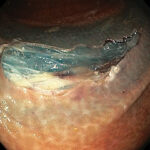 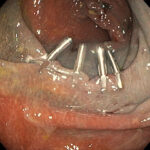 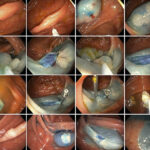